June marks the beginning of summer, the end of the school year, and thanks to Manitoba’s Agriculture Minisiter, Ralph Eichler, Turkey Month in our beautiful province.

What does this mean?

Manitoba’s Ag Minister has declared June as Turkey Month in Manitoba for nearly two decades – and the turkey producers in this province benefit by increasing awareness and encouraging the consumption of turkey throughout the summer months.

While whole turkey may be well-known as the main ingredient for a holiday meal, turkey has become more versatile than ever. Most major grocers carry different cuts of turkey including ground turkey breast, ground turkey thigh, boneless skinless turkey breast, turkey thighs, and turkey drumsticks, just to name a few. Contrary to its other poultry counterpart, cuts of turkey are generally larger and can feed more than one person (per breast). Furthermore, turkey is competitively priced.

Manitoba’s turkey farmers produce more than 7,000 turkeys three times per year, that’s more than 1.3 million birds that are marketed in Manitoba every year, comprising of seven per cent of the turkey market in Canada.

“Consumer trends are slowly shifting towards the consumption of turkey as an everyday protein,” says Lynne Roy of the Manitoba Turkey Producers.

“More and more households are eating turkey on a weekly basis, and we are going to continue to promote the consumption of turkey to increase market value and, ultimately, create a sustainable industry for our farmers.”

To commemorate the occasion, the Manitoba Turkey Producers will be hosting a Pop-Up Barbecue on Thursday, June 8 from 11 a.m. to 1 p.m. at the Corus Entertainment studios, 1440 Jack Blick Ave, Winnipeg. 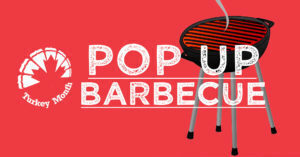 Come down for a turkey burger and a chance to win some great prizes! Happy #ManitobaTurkeyMonth